I was waiting in the line up at the Blackcomb beer and wine store, just like I always do. The cashier was telling the customer in front of me about a local beer (“Blue Pig”, I think).  When it came time for me to pay for my bottle of Painted Rock, he says “This isn’t your first rodeo”, implying that I’d picked a good one.  But I thought the comment was fitting for our whole week at Whistler; we’ve been going since 2004 and know our way around.  It’s no longer novel, but it’s still awesome.   And this was a particularly great trip.

It didn’t start well.   Just as we were ready to go skiing on our first day, Andrew realized that he had picked up a snowboard bag in YVR that was exactly the same as his, but wasn’t his. I spent an hour on hold waiting to talk to Air Canada “Customer Service”, while the others hit the slopes.  It turned out that Customer Service won’t deal with baggage claims. 15 minutes later, I got through to AC Baggage services, but they needed me to return the bag we took, back to YVR. That’s a problem, because its a 2 1/2 hour drive, and we didn’t have a car.

Another 45 minutes with the hotel staff trying to figure out how to get the bag to YVR and file my lost baggage claim, without going in person. Finally, I gave up; it can’t be done.

So I headed out to the Magic chair-lift to catch up with the others, but the line-up was massive. It took more than an hour to get up.

Next day, YVR called. They had Andrew’s bag, and offered to send it to the other guy. After that, it was up to us to arrange a swap. We did.

16 Feb. ACMS on Blackcomb. 30cm new snow + long weekend = Huge lineups. We make the best of it. C took this great photo on the Crystal chair.

17 Feb. ACMS on Whistler. S nearly decapitates a lifty on T-bars (Truly sorry) Amazing, actually, that the T-bars are running. They never run them. Later in the week A noticed that someone had pasted stickers on the Roundhouse doors saying: “Why aren’t the T-bars running?”

That afternoon, H arrived from visiting Geoff and Karen in Victoria. It’s great for us all to be together, really wonderful.

18 Feb. AS on Blackcomb. It “puked” snow all day and we packed in some awesome fresh tracks in the morning.

S on the Bite

A on the Bite

19 Feb. ACMS on Whistler for a different kind of day. Mostly in Harmony Bowl in the morning. A decapitates a tree near the Emerald chair in the afternoon. We took the Peak-to-Peak gondola to Blackcomb just before it shut down for the day and arrived to find the place deserted. We were virtually the last ones on the mountain, which was weird, cool and great fun.

20 Feb. ACMS on Blackcomb mtn, for an awesome bluebird morning on fresh snow at 7th Heaven. A and S followed a long traverse into Lakeside Bowl for a fresh powder run in the bright sun.

A and I finished the morning with a run down Couloir Extreme, supposedly one of the 10 steepest in-bounds runs in the world. (photo below) We stopped at the Glacier Lodge for lunch, just in time to see the Cdn women beat USA for the gold hockey medal in OT. The place went wild. 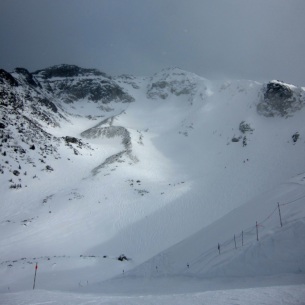 I skied this: Couloir Extreme