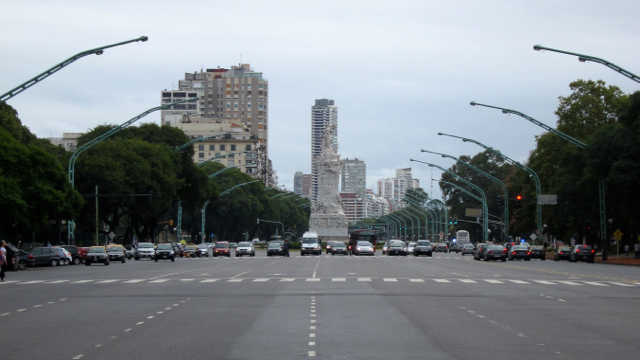 i’m working on consolidating my thoughts on Buenos Aires, both the place and the people. Let’s start with…

Any big city is in a constant state of re-construction as buildings become old, tired and no longer fit for purpose.  This is certainly true in BA, and especially in our Palermo neighbourhood. Here, many of the older residential buildings are already gone, and on nearly every block those which remain are being replaced with new condo-apartments. The new buildings are modern, but soul-less compared to the charming European influenced structures they have replaced.

In our two weeks here, we saw only one example where architectural history had been preserved in a new construction project. On a walk one afternoon, we passed a boutique hotel which added several floors of modern glass and steel above an old building, but retained the original facade to keep the street-scape intact.  Much more common is the approach taken by Nike at their Avenida Santa Fe location, and pictured below. The only traditional features that are visible are those reflected from the building across the street.

Buenos Aires Street Scenes some locations are in dire need of rehabiliation.

I am really glad we found an apartment in one of the older buildings.  Even though it is quirky and noisy, I think it has added much to our stay. However the interior rooms are dark, because a new building was constructed just a couple of meters away. And there are water stains on the ceiling. And the water heater needs to be relit once a day, or more. And I speculate that the reason the rooftop terazza is permanently closed, is because it needs work that the residents aren’t prepared to underwrite.

Despite the efforts at re-development, it feels like the the city is in slow decline. There are showpiece buildings scattered around, but the majority look dirty, tired and shabby. Graffiti is rampant at street level, and there are patches of grime on the upper floors. The University’s Faculty of Social Sciences building, is in such bad condition that it is hard to believe it is still in use.

There just doesn’t seem to be enough new development, or sufficient effort to maintain the status quo. BA’s hot, humid summers, and the dismal climate for economic development are taking their toll, and slowly winning.

3 thoughts on “So now you’re an expert on Argentina?”